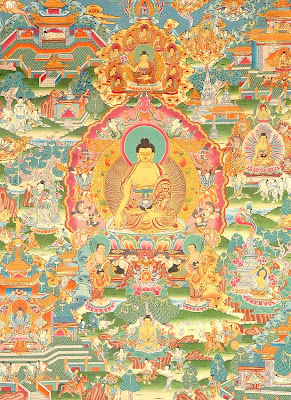 (From Wikipedia, the free encyclopedia)
Official name
VesākhaVesakWesakVisakah PujaVaishakaBuddha PurnimaVisakha BuchaSaga Dawa佛誕 (fó dàn)Phật Đảnวิสาขบูชา
Also called
Buddha's Birthday or Buddha Day
Observed by
All Buddhist sects
Type
Buddhist
Significance
The birth, enlightenment and passing away of Buddha
Date
First full moon of the Taurus, in May (common years) or June (leap years)
Observances
Meditation, Observing the eight precepts, partaking in vegetarian food, giving to charity, "bathing" the Buddha
Related to
Hanamatsuri
Vesākha (Pali; Sanskrit: Vaiśākha वैशाख) is an annual holiday observed traditionally by Buddhists in the South Asian and South East Asian countries of Nepal, Singapore, Vietnam, Thailand, Cambodia, Malaysia, Sri Lanka, Myanmar, Bangladesh, Indonesia and India.[1] Sometimes informally called "Buddha's Birthday," it actually encompasses the birth, enlightenment (Nirvana), and passing away (Parinirvana) of Gautama Buddha.[2]
The exact date of Vesākha varies according to the various lunar calendars used in different traditions. In Theravada countries following the Buddhist calendar, it falls on the full moon Uposatha day (typically the 5th or 6th lunar month). Vesākha Day in China is on the eighth of the fourth month in the Chinese lunar calendar. The date varies from year to year in the Western Gregorian calendar but falls in April or May.
In 2010 the first full moon day in May is the twenty-seventh.[3] However, Myanmar and Cambodia observe the event this year on April 28, 2010.

In Mahayana Buddhist traditions, the holiday is known by its Sanskrit name, वैशाख Vaiśākha, and derived variants of it. Vesākha is known as Vesak or Wesak (වෙසක්) in the Sinhalese language.
It is also known as:
बुद्ध पुर्णिमा/বুদ্ধ পূর্ণিমা Buddha Purnima or बुद्ध जयंती/বুদ্ধ জয়ন্তী Buddha Jayanti in India, Bangladesh and Nepal
花祭 (Hanamatsuri) in Japan,
석가 탄신일 Seokka Tanshin-il (Hanja: 釋迦誕身日) in Korean,
佛誕 (Mandarin: Fódàn, Cantonese: Fātdàahn) in Chinese-speaking communities,
Phật Đản in Vietnamese,
ས་ག་ཟླ་བ། Saga Dawa (sa ga zla ba) in Tibetan,
វិសាខបូជា Visak Bochéa in Khmer,
วันวิสาขบูชา Visakah Puja (or Visakha Bucha) in Thai,
Waisak in Indonesia,
වෙසක් පසළොස්වක පෝය Vesak (Wesak) in Sri Lanka and Malaysia.
The equivalent festival in Laos is called ວິຊຂບູຊ Vixakha Bouxa and in Myanmar is called Ka-sone-la-pyae meaning “Fullmoon Day of Kasone” which is also the second month of the Myanmar Calendar.
[edit] History
The decision to agree to celebrate Vesākha as the Buddha’s birthday was formalized at the first Conference of the World Fellowship of Buddhists held in Sri Lanka in 1950, although festivals at this time in the Buddhist world are a centuries-old tradition. The Resolution that was adopted at the World Conference reads as follows:
“
That this Conference of the World Fellowship of Buddhists, while recording its appreciation of the gracious act of His Majesty, the Maharaja of Nepal in making the full-moon day of Vesak a Public Holiday in Nepal, earnestly requests the Heads of Governments of all countries in which large or small number of Buddhists are to be found, to take steps to make the full-moon day in the month of May a Public Holiday in honour of the Buddha, who is universally acclaimed as one of the greatest benefactors of Humanity.
”
On Vesākha Day, Buddhists all over the world commemorate events of significance to Buddhists of all traditions: The birth, enlightenment and the passing away of Gautama Buddha. As Buddhism spread from India it was assimilated into many foreign cultures, and consequently Vesākha is celebrated in many different ways all over the world.
[edit] The celebration of Vesākha

Vesākha is on May 8, 2009 in Thailand. (See column 2.) It is not May 9.
May 2007 had two full moon days, the 1st and the 31st. Some countries (including Sri Lanka, Cambodia and Malaysia) celebrated Vesākha on the 1st, while others (Thailand, Singapore) celebrated the holiday on the 31st due to different local lunar observance. This difference also manifests in the observance of other Buddhist holidays, which are traditionally observed at the local full moon.
On Vesākha day, devout Buddhists and followers alike are expected and requested to assemble in their various temples before dawn for the ceremonial, and honorable, hoisting of the Buddhist flag and the singing of hymns in praise of the holy triple gem: The Buddha, The Dharma (his teachings), and The Sangha (his disciples). Devotees may bring simple offerings of flowers, candles and joss-sticks to lay at the feet of their teacher. These symbolic offerings are to remind followers that just as the beautiful flowers would wither away after a short while and the candles and joss-sticks would soon burn out, so too is life subject to decay and destruction. Devotees are enjoined to make a special effort to refrain from killing of any kind. They are encouraged to partake of vegetarian food for the day. In some countries, notably Sri Lanka, two days are set aside for the celebration of Vesākha and all liquor shops and slaughter houses are closed by government decree during the two days. Also birds, insects and animals are released by the thousands in what is known as a 'symbolic act to liberation'; of giving freedom to those who are in captivity, imprisoned, or tortured against their will. Some devout Buddhists will wear a simple white dress and spend the whole day in temples with renewed determination to observe the eight Precepts.

Young novice on Vesākha Day Parade
Devout Buddhists undertake to lead a noble life according to the teaching by making daily affirmations to observe the Five Precepts. However, on special days, notably new moon and full moon days, they observe the eight Precepts to train themselves to practice morality, simplicity and humility.
Some temples also display a small image of the baby Buddha in front of the altar in a small basin filled with water and decorated with flowers, allowing devotees to pour water over the statue; it is symbolic of the cleansing of a practitioners bad karma, and to reenact the events following the Buddha's birth, when devas and spirits made heavenly offerings to him.
Devotees are expected to listen to talks given by monks. On this day monks will recite verses uttered by the Buddha twenty-five centuries ago, to invoke peace and happiness for the Government and the people. Buddhists are reminded to live in harmony with people of other faiths and to respect the beliefs of other people as the Buddha had taught.
[edit] Bringing happiness to others
Celebrating Vesākha also means making special efforts to bring happiness to the unfortunate like the aged, the handicapped and the sick. To this day, Buddhists will distribute gifts in cash and kind to various charitable homes throughout the country. Vesākha is also a time for great joy and happiness, expressed not by pandering to one’s appetites but by concentrating on useful activities such as decorating and illuminating temples, painting and creating exquisite scenes from the life of the Buddha for public dissemination. Devout Buddhists also vie with one another to provide refreshments and vegetarian food to followers who visit the temple to pay homage to the Enlightened One.
[edit] Paying homage to the Buddha
Tradition ascribes to the Buddha himself instruction on how to pay him homage. Just before he died, he saw his faithful attendant Ananda, weeping. The Buddha advised him not to weep, but to understand the universal law that all compounded things (including even his own body) must disintegrate. He advised everyone not to cry over the disintegration of the physical body but to regard his teachings (The Dhamma) as their teacher from then on, because only the Dhamma truth is eternal and not subject to the law of change. He also stressed that the way to pay homage to him was not merely by offering flowers, incense, and lights, but by truly and sincerely striving to follow his teachings. This is how devotees are expected to celebrate Vesak: to use the opportunity to reiterate their determination to lead noble lives, to develop their minds, to practise loving-kindness and to bring peace and harmony to humanity.
Αναρτήθηκε από Karma Gyaltsen Ling στις 1:15 μ.μ.