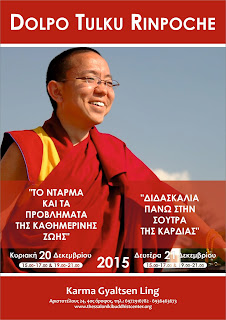 Dolpo Tulku, also called Tulku Sherab Zangpo, was born into a Lama family in Dho Tarap, Dolpo, in 1982. He became a monk at Kanying Shedrub Ling Monastery, Nepal, at the age of 9 in 1991 and was recognized by Dilgo Khyentse Rinpoche to be the reincarnation of the third Dolpo Nyingchung Drubthob shortly thereafter. He was then sent to Namdroling Monastery, India, to receive his monastic education under the guidance of Penor Rinpoche.

1994 the Dolpo People’s Welfare Association sponsored his grand official enthronement ceremony at Shechen Monastery, Kathmandu, in the midst of more than ten thousand natives from Dolpo and adjacent regions. Hence he got the responsibility to guide the three main monasteries, three retreat centers and the people of Dolpo. Whilst studying tantric rites and rituals in the monastery, he assumed the responsibility of a Vajracharya.

In 1997, when he was just 15 years old, he entered Nyingma Ngagyur Institute, the prestigious monastic college of Namdroling Monastery where he studied, debated and researched all the sutra and tantra teachings of Lord Buddha for ten years under more than forty scholars and masters including His Holiness Penor Rinpoche. He also studied Tibetan literature, Poetry, Tibetan History and Tibetan Religious History. He secured first division marks in all examinations. Owing to the high scholarship and experience, he was appointed junior teacher and a member of the Rigdzod Editorial Committee whilst an eighth year student.

He finished his advanced Buddhist studies in the year 2007 after which he was appointed as a full-fledged teacher at Ngagyur Nyingma Institute. Since then he has reached a status equivalent to a university professor.

In 2008 he returned for the first time to Dolpo in 17 years to visit his monasteries and to get enthroned there. He was accompanied by a German film team, who produced an award-winning documentary ‘Dolpo Tulku – Return to the Himalayas’. Since then Rinpoche has travelled extensively through Asia and Europe to teach Buddhist philosophy, give public talks on mind training, conduct seminars on stress & burn out and to raise awareness about the situation in Dolpo.

He started implementing projects in Dolpo since 2007, together with the local population. The Dolpo Tulku Charitable Foundation was registered with the Nepali government in 2010 and has the main aims to promote the protection of the environment, the improvement of the health care and the effective combination of modern and traditional education.