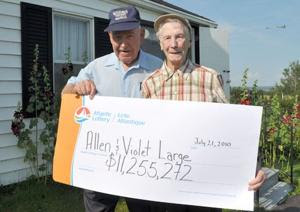 A retired Canadian couple who won $11.3 million in the lottery in July have already given it (almost) all away.

"What you've never had, you never miss," 78-year-old Violet Large explained to a local reporter.

She was undergoing chemotherapy treatment for cancer when the couple realized they'd won the jackpot in July.

"That money that we won was nothing," her tearful husband, Allen, told Patricia Brooks Arenburg of the Nova Scotia Chronicle Herald. "We have each other."

The money was a "headache," they told the paper--mainly, it brought anxiety over the prospect that "crooked people" might take advantage of them. Several people called them out of the blue to ask for money when the news first broke that they'd won the jackpot. So they began an $11 million donation spree to get rid of it and help others, the Chronicle Herald reports:

They took care of family first and then began delivering donations to the two pages' worth of groups they had decided on, including the local fire department, churches, cemeteries, the Red Cross, the Salvation Army, hospitals in Truro and Halifax, where Violet underwent her cancer treatment, and organizations that fight cancer, Alzheimer's and diabetes. The list goes on and on.

Violet told the Canadian Press that they retained about 2 percent of the money for a rainy day.

"It made us feel good," Violet told the Chronicle Herald. "And there's so much good being done with that money."

The Nova Scotia couple have been married more than 35 years and quietly saved up the money that Allen made as a welder and Violet made in retail before retiring.

"We haven't spent one cent on ourselves because we've been too busy getting everything looked after and with my health, I have to wait to get my health back to get the energy to do anything," Violet told the National Post. "We're not travelers anyway. We live in the country and we're proud of it. Money can't buy you health or happiness."

Now their neighborhood is abuzz over their good deeds.

"People who know them just know that's the type of people they are—they're just happy to have each other," local restaurant owner Lori Hingley told the Canadian Press.