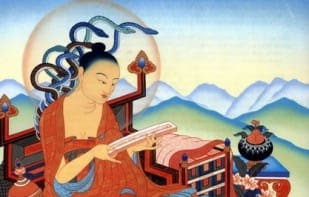 Letter to a Friend (Skt. Suhṛllekha; Tib. བཤེས་པའི་སྤྲིང་ཡིག་, shepé tring yik, Wyl. bshes pa'i spring yig) — a shastra by Nagarjuna. This text belongs to Nagarjuna’s Collection of Advice.
Nagarjuna (1st - 2nd century A.D.) wrote his celebrated poem Letter to a Friend as a letter of advice to his friend King Gautamiputra/Satavahana.
This advice gives a concise and comprehensive introduction to the entire path and practice of Buddhism. It guides both householders and the ordained onto the path leading to liberation and enlightenment. The instructions are of special interest to those who wish to take up spiritual activity while continuing to live and work in society; they are meant to convey the whole meaning of the Dharma to the ordinary person in a language and style that are easy to understand.
Despite its short length (only 123 verses), it covers the whole Mahayana path with unusual clarity and memorable imagery; thus it is widely quoted by Tibet's great masters and scholars in the many commentaries they have written on the Buddhist path. 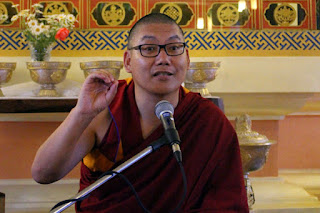 Khenpo Choying Dorjee was born a student of Khyentse lineage. He was also a devoted student of the late Khen Rinpoche Kunga Wangchuk. He joined Dzongsar Institute in 1992, when it was still located in Bir. In 1998 he was granted his Shastra Degree in Buddhism, which is the equivalent to a Bachelor’s Degree. He received his Archaya title, which is the equivalent to an MA, in 2001. He received his Khenpo title in 2002 and received his Khenpo Degree, which is the equivalent to a PhD in Buddhism, in 2004. He worked as a revision teacher (kyorpon) at the shedra from 1999 to 2000 and continued as a head teacher from 2001 to 2013. In 2010 he was appointed as teacher of Sakya Dungsay Avirkita Rinpoche. He also served as Assistant Principle of the shedra from 2008 to 2012. From 2006 to 2007 he studied English at the British Council in Singapore. In 2011 he was sent to UC Berkeley by Rinpoche, sponsored by KF, as a visiting scholar. Khenpo Choying Dorjee was appointed Head Principle of DKCLI by Rinpoche in 2013. He serves on the KF India Program Committee.
Αναρτήθηκε από Thessaloniki Buddhist Center στις 9:17 μ.μ.